Realm Royale introduced a unique class system, which have its own feature. This guide explains the Warrior class, passive & active abilities, legendary weapons. Also this guide will cover useful tips on playing Warrior. 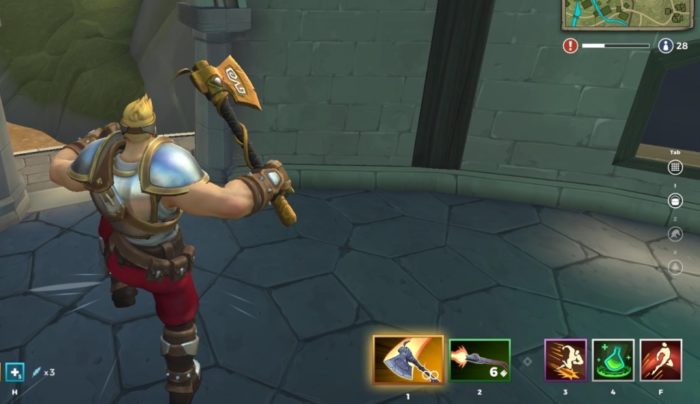 Warrior has a unique ability to approach enemy players and is good at close range battles. Passive and active abilities will also help fighting in the battlefield.

Hero leap and charge can give damage to an enemy player in close proximity, a healing flask, net shot, shield potion is an ability to help fight at short range.

We will choose two out of the four types excluding the unique hero leap. We also introduce the recommended abilities constitution below, so please refer if you do not mind.

In “Realm Royale”, warrior class weapons boast the highest damage . I can not throw far away, but it’s easy to hit because the hit box is wide.

It is possible to produce 120 shards and 1 chicken at the smithyard for a required time of 60 seconds.

Warrior has abilities that are close to enemy players, it is very compatible with hero leap and charge, enemy players with legendary armor can be sunk with just 3 shots.

I will introduce the recommended abilities composition when I explained the performance and ability of Warria as one.

Below are some basic tips on Warrior and some useful tips for playing.

As the number of shades available is limited at the beginning of the opening, we need to narrow down some of the items we make at the smithy ground.

In the case of the warrior, if you can obtain the class weapon ‘THROWING AXES’ it will power up significantly. You need to kill one enemy player, but we recommend you to produce it with top priority.

“Heroic Leap” which is a unique ability is a very excellent movement skill, it is also useful when starting to battle or leaving a battle approaching an enemy player.

Actually hero leap, it is possible to damage damage to the surroundings when landing. When starting a battle using this ability, let’s conscious of landing on the enemy player.

Also, if you can not stand superior in a shootout, it is one hand to use for emergency departure. In any case, it is very important to keep track of the cool time after use.

Since the warrior is suitable for short range battle, it would be a very effective hand to attack a smithy where players are likely to stay. Likewise, I can say that I am good at other indoor battles.

If you succeed in defeating the enemy player who is making the item, you can also take away the completed item. Please actively attack the forge and try to practice to definitely win the battle.

Warrior is ideal to battle with all enemy players at close range, but other classes are afraid to approach Warrior, so it tends to be targeted from a medium distance.

As a weapon that covers the weakness of middle range battle, I recommend you to have “RIFLE” or “HEIRLOOM RIFLE” with fast speed.

While checking well, let’s stop the physical strength of the enemy player or shorten the distance at a stroke at the time when you can approach safely, and take advantage of throwing axes and charges to defeat them.