Dart Monkeys throws single dart at nearby Bloons. Short range and low pierce but cheap. Most of the time, Dart Monkeys are used as a starter while farming money for heroes, because this tower is unlocked first in every Bloons TD version.

Dart Monkeys (0/0/0) looks like a real monkey with brown skin and looks very different on its tier 5 upgrades. 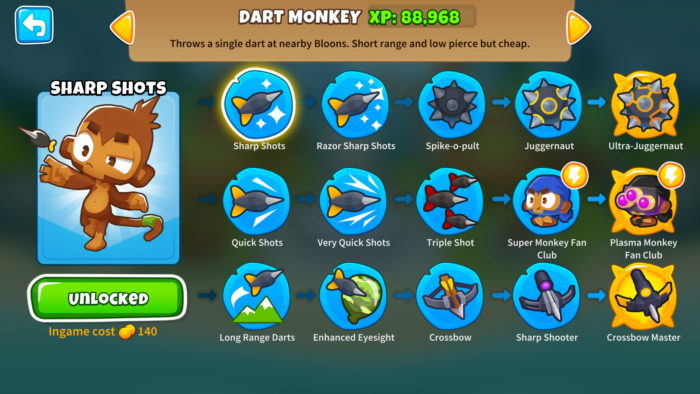 The price varies on difficulty, as shown below:

Just like previous version (btd 5) you can choose on three different paths with unique attack, strength, and weaknesses.

This path excels on creating havoc. If you manage to upgrade into 5th tier, you can see spiked balls everywhere. Great on ceramic rounds.

I rarely use this path because I prefer Super Monkey towers instead. But if you want to experiment on your strategy, you might want to use this path.

My personal favorite. Crossbow Master is insane! It can destroy a normal MOAB in seconds, this tower is a must have. Make sure to unlock two Crossbow Master using knowledge feature.